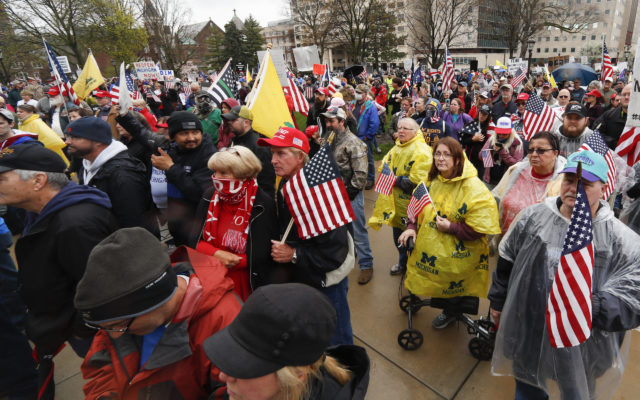 The second large protest against Michigan Gov. Gretchen Whitmer’s “Stay Home, Stay Safe” order took place Thursday at the Michigan State Capitol in Lansing. Hundreds of protesters waved American flags and some carried firearms as state lawmakers inside considered an extension of the governor’s state of emergency to address the coronavirus pandemic. Some of the protesters forced their way inside the capitol, attempting to enter the House floor, but were blocked by Michigan State Police and sergeants-at-arms.

The protest was organized by Michigan United for Liberty and called the “American Patriot Rally.” A previous Lansing protest held on April 15 was called “Operation Gridlock.”

Meanwhile, the Michigan House, which has a Republican majority, voted against an extension of the state’s emergency declaration, and also authorized a lawsuit that challenges Gov. Whitmer’s authority and actions to address the COVID-19 outbreak. The governor had asked for a 28-day extension of the emergency declaration, which was to expire Thursday night. Whitmer has said the state of emergency will continue because another order gives her adequate powers to make decisions.

Michigan has been one of the hardest hit states in the COVID-19 pandemic, with more than 41,000 positive cases and 3,789 deaths.