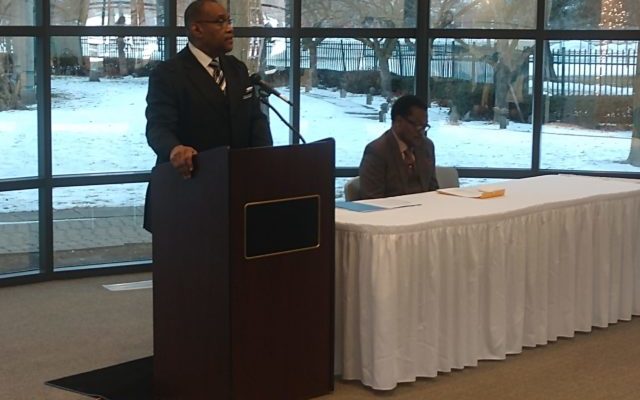 The Saginaw branch of the NAACP held its annual news conference Wednesday, January 29 on the state of the community.

President Terry Pruitt and member Carl Williams, a former state representative, outlined successes and challenges people of color faced in the Saginaw area over the past year and goals the organization has for 2020.

One of the main goals, according to the group, is getting voters to the polls on Election Day. Williams detailed how in the past, the NAACP had been proactive encouraging residents to register to vote. Now, he says, the focus is on getting registered voters out to vote.

“One of the things that I learned in the legislature is that if you don’t have anybody representing you at the table, you not only don’t get a piece of the pie, you’re not even discussed. Everybody needs the ability to put somebody at the table who will represent them.”

In the 2018 election, he says, nearly half of all eligible voters nationwide didn’t vote at all.

The group is also focused on ensuring a fair and accurate Census count. According to Pruitt, minorities are historically under-counted in the Census. The Saginaw NAACP will be involved with about a hundred local churches in sending out mailers, working with media outlets and other partner organizations to get people counted.

The organization also highlighted some of the work it’s done over the past year. One of the key areas has been in education, working with the Saginaw School District and outlying areas on skilled trade programs. One facet Pruitt says he’s encouraged by is recent reports of the decline of students leaving the district.

Williams also spoke on areas of concern like criminal justice and appreciates the work done by the Michigan Indigent Defense Commission, which helps low income people accused of crimes get better legal representation. He also praised the upcoming Raise the Age law which ensures criminal offenders under the age of 18 receive age appropriate facilities to serve sentences.

However, both Williams and Pruitt lament the polarization of ideas in today’s political climate. Pruitt says instances of discrimination and racism are increasing, even in Saginaw County. He says there’s no doubt the country and the region have prospered economically, but not everyone is seeing the benefits of that economic opportunity. Pruitt says its time to set aside our differences and work together to find solutions to promote equity and unity.

Last Chance for Saginaw Residents to Apply for New Furnaces

Cardi B offers advice to young girls who want plastic surgery for a larger rump!