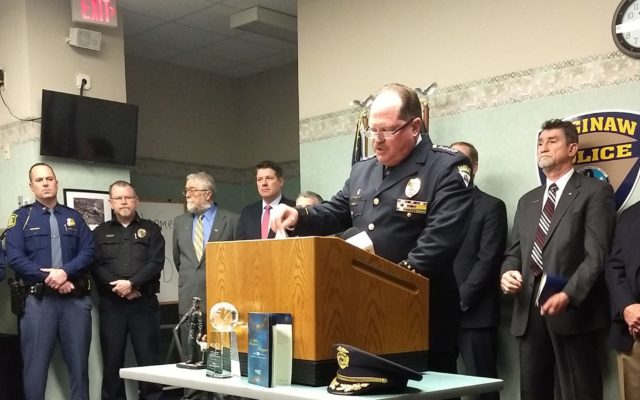 Crime in the City of Saginaw continues a downward trend for the eighth straight year. Statistics for 2019 show fewer murders in the city. There were nine murders in Saginaw last year compared with 15 during the previous 12-month period. Overall crime is down by 15% with a 25% reduction in shootings and a 40% drop in homicides.

Saginaw Police Chief Robert Ruth says a city ordinance requiring surveillance cameras in high cash flow businesses like financial institutions, gas stations and convenience stores, has solved two murders. Ruth said additional cameras will be installed in public areas of the city. The cameras WILL NOT be monitored, but investigators will review footage after any criminal activity.

Ruth said the city’s neighborhood associations and citizens are providing officers with additional eyes and ears on the street. They are reporting crimes and suspicious activity in  their neighborhoods.

Covenant HealthCare is covering the cost of four Saginaw Police officers to patrol around its hospitals and provide a fifth K-9 team giving the city 247 coverage.

A partnership with the Michigan State Police has troopers assigned to work in the city. Assistant Tri City Post Commander Lt. Jasen Sack said six cars are out each night. The troopers make some 800 traffic stops each month. The result is the arrest of fugitives on warrants and taking between 10 and 15 illegal weapons off the streets each month.