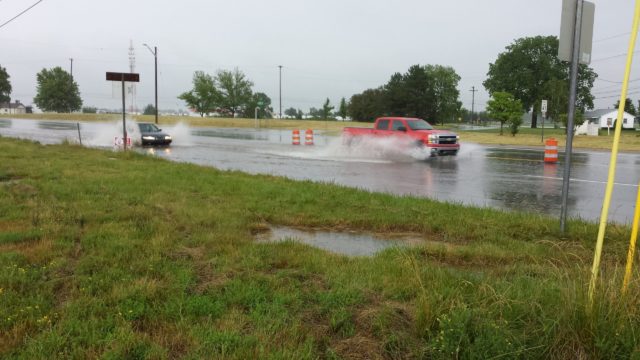 With Great Lakes levels on the rise, flooding throughout the Saginaw Bay watershed seems to be inevitable in 2020.

The U.S. Army Corps of Engineers is predicting water levels in Lakes Huron and Michigan to surpass a record set in 1986. The lakes are already several feet above their average level. In a roundtable discussion Wednesday, February 19 with local, state and federal officials in Bay County, a grim scenario was presented as talk focused on how to mitigate or even prevent much of the flooding that’s expected.

Recently, the Bangor Township Board of Trustees and the Bay City Commission, along with several other communities around the state, passed resolutions urging the governor of Michigan to declare a statewide emergency as water erosion chips away at shorelines. The erosion has already caused homes to be lost and threatens to wash out highways.

During the Wednesday meeting, stakeholders from the Corps of Engineers, Michigan State Police Emergency Management and Homeland Security Division, Bay County, Bay City, Bangor Township, Hampton Township, State Senator Kevin Daley’s office, Congressman Dan Kildee’s office and Senator Debbie Stabenow were all in attendance. Everyone agreed the potential for flooding of those communities was the most pressing issue, as spring and summer rains contribute to the elevated water levels.

However, what could be done about it was a tricky knot to unravel. According to the Bay County Emergency management Coordinator Ryan Manz and state police emergency management representatives, a county must first declare a disaster through Michigan Public Act 390 before it can receive state aid, which can then qualify it for federal aid. This means the disaster must be on a catastrophic level, such as the flooding which occurred in Midland, Isabella, Bay and Gladwin counties in 2017.

Manz says that’s a problem for the region’s current situation.

“The biggest obstacle is because it’s such a long, drawn out event, it doesn’t currently fit under the state Public Act 390 or the federal Stafford Act, which both of those things govern disasters. in order to qualify for either of those programs, it has to be a significant event with a determined time factor. We’ve seen the high water levels for over a year and a half now.”

Bay County Executive Jim Barcia says he and other officials are trying to be proactive, though he’s ready to do what’s necessary should the time come.

“We’re trying to educate residents about what they can do to lessen damage, especially getting valuable items out of basements. Certainly stocking up with sandbags when they’re available to protect what we know to be disastrous flooding levels coming this late spring or early summer, and I am prepared and ready to act to declare a state of disaster in Bay County when that happens.”

The meeting did shine a light of hope, however. U.S. Army Corps of Engineers representatives Marie Strum and Jeff Yoakam spoke of advance measures the corps can take to help mitigate potential damage, even before Public Act 390 of the Stafford Act come into play. These include working with communities to provide technical assistance, advice they can take to employ proactive measures. The other assistance is more direct, providing sandbags, installing flap gates or pumps, though these often come at a cost to the requesting community.

Senator Stabenow says work is being done on the state level for short term solutions.

“There’s multiple things. I know that the Governor has dollars in her budget, I’m really glad to see, and hopefully the legislature will lean in and work with her to be able to put some immediate money in.”

“We have to look at longer term. How we’re going to set up grant programs, revolving loan funds… Things that will allow communities to be able to handle what’s coming, because we are, in fact, now seeing what’s happened from 100 years of carbon pollution that we’ve not taken seriously until now. And so now we’re having to address it.”

And the problem isn’t Michigan’s alone. Communities all around the Great Lakes, including in Canada, are dealing with their own water woes from rising levels. While water levels do fluctuate from lower to higher, even the low points will continue to be higher than normal as temperatures warm.

It will be a costly process, with communities scrambling to improve, maintain or repair infrastructure to handle the flooding. But beyond the large scale, Bay County Drain Commissioner Joseph Rivet reminded those in attendance how this will impact people on a personal level.

Rivet says in Bay County, the drainage system works well. However, he says, when the lake levels rise, the water table rises and any extra water from precipitation has nowhere to go.

“Obviously when we build drains, we build them to handle flood events and storm events, right? So the water can move out to the bay as quickly as possible. When you’ve got high water tables and there’s water everywhere in the system, water’s going to sit on property that might have gone away in 12 hours, it might now be sitting for three or four days.”

Rivet encourages residents to purchase flood insurance if they don’t already have it, and echoes Barcia’s warnings to have people elevate or remove items from basements and install pumps.

“Basements that have never had water in the past will start to have water, because there’ll be both seepage and the inability for the water to go away. So the water will end up just sitting there and eventually, it’s going to negatively impact people. So when the water is sitting there, plus you add additional water from a rain event, you’re going to have issues.”

All are in agreement the water levels are problem which simply won’t go away and understand they can no longer adopt a wait and see policy.

The M&M characters are getting a redesign