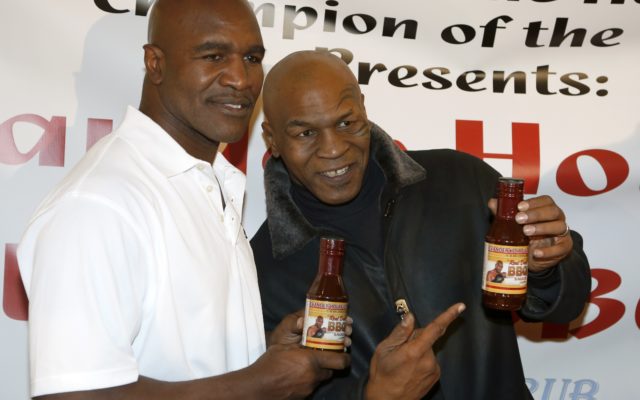 After a surprisingly good performance in his match against Roy Jones Jr. last weekend (even though it ended in a much-disputed draw), it is safe to say that Mike Tyson still has the juice in the boxing ring. Now, it looks like another former boxer wants one more match with Iron Mike…and he is no stranger to being in the ring with him, either.

ESPN reports that Evander Holyfield has challenged Tyson to one more match. In a Tuesday news release, Holyfield stated that a trilogy fight between the two former champions would be a must-see global event:

“My side tried to make the fight happen and we got nothing but excuses. Now I can see why he wanted a tuneup fight before thinking about fighting me. No more excuses. This is the fight that must happen for both our legacies. Saturday night you said you were ready to fight me, so sign the contract and get in the ring, Tyson. The world is waiting and it’s on you now. I’m ready.”

Following his match with Jones last weekend, Tyson was seemingly open to getting back in the ring with Holyfield, although it may take some direct conversations between the two of them to make it happen.

“Maybe Evander needs to talk to me because every time my business associates talk to his business associates, it doesn’t turn out well. So, I don’t know. If you could see what we made tonight, if these guys really care about the welfare of Evander, they would have had this fight with Evander. Maybe we’ll do another, but whoever he’s with, whoever is handling him is totally wrong.”

If this fight happens, this would be the first matchup between the two boxing legends in almost 25 years. The last time they fought was in 1997, when Holyfield retained the WBA Heavyweight Championship (won in a previous matchup the year before) after Tyson was disqualified in the fourth round. In case you need a reminder as to why he was disqualified…

Thankfully, all was forgiven after that fight. However, to see these two back in the ring for one last match would definitely be interesting to watch. We’ll see what happens next year.