Prison Reform & Innocence: Where Do We Go From Here? 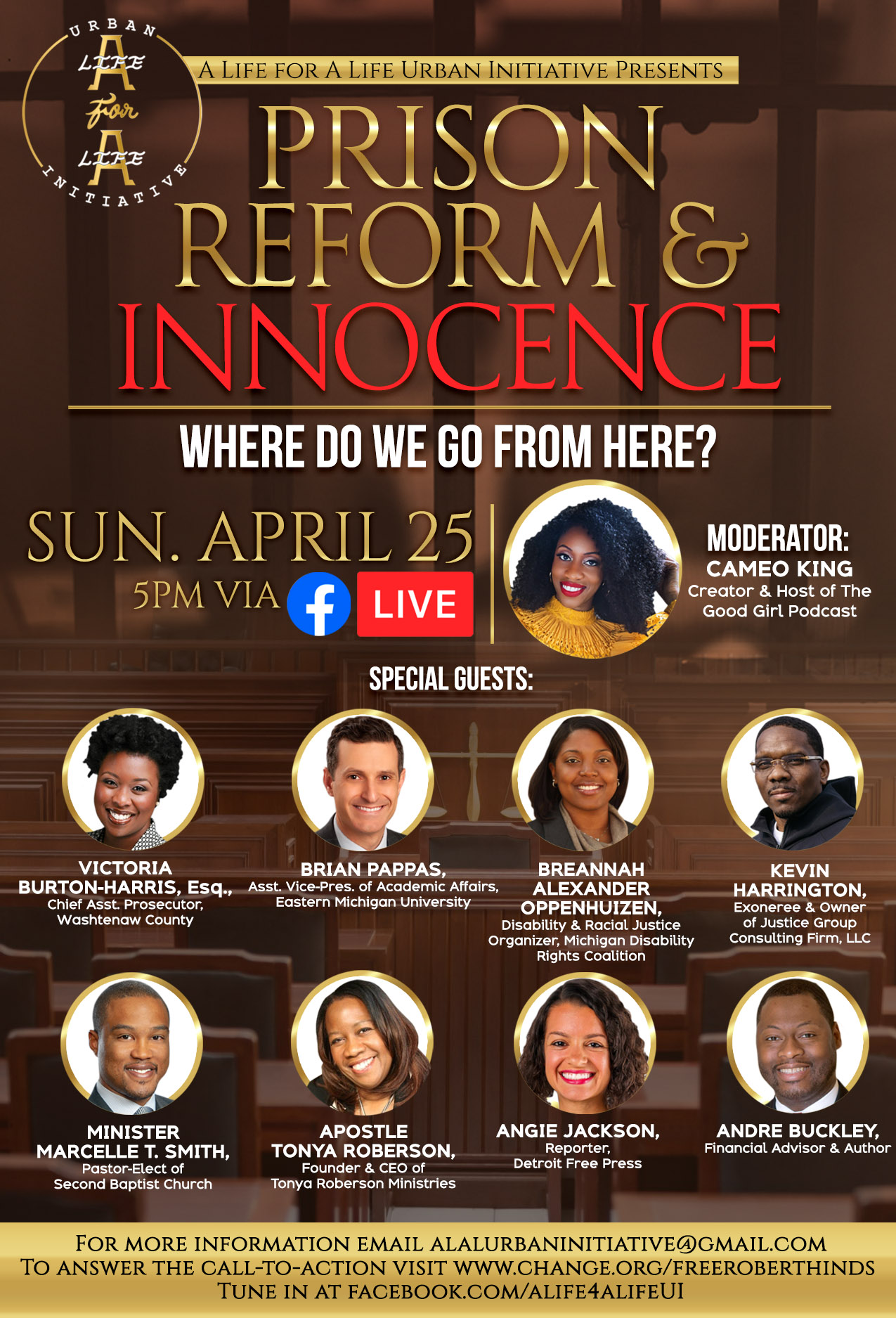 On Sunday, April 25 at 5PM EST, A Life for A Life Urban Initiative will host a virtual town hall titled “Prison Reform & Innocence: Where Do We Go From Here?” A Life for A Life Urban Initiative is a growing grassroots organization founded in Michigan in 2013 to advocate for social justice. This event is part of the organization’s continual efforts to emphasize the importance of prison reform and create greater awareness about the broad scope of police and prosecutorial misconduct, especially against minorities, across the nation.

In addition to educating the public on evolving prison reform legislation and the effects of systemic racism within the criminal justice system, the event will also lend special attention to the disturbing narratives of inmates Robert T. Hinds and Alphonso Clark. Jr., both of whom are currently serving life sentences at the Chippewa Correctional Facility in Kincheloe, MI and who have pending exoneration applications with the Wayne County Conviction Integrity Unit (CIU). Both of the inmates’ applications allege police misconduct as the cause of their wrongful convictions.

Victoria Burton-Harris. Esq., is one of the criminal justice professionals who will speak during the event. A Michigan native and former private practice family and criminal defense attorney, Burton-Harris was recently appointed as the Chief Assistant Prosecutor for Washentaw County on January 1, 2021 by Prosecutor Eli Savit. Known for her passion for serving in the community and educating others on the relationship between law, social justice, and equality, she has often vocalized her belief in criminal justice reform and the importance of understanding the intersectionality of criminal justice and poverty. Burton-Harris is scheduled to open the town hall in an engaging and transparent interview on prison reform and the role that prosecutorial misconduct has played historically in wrongful convictions in Michigan.

Hinds, charged with first-degree premeditated murder and possession of a felony firearm as a juvenile, was convicted of both charges and sentenced to life in prison without parole at the age of 17. After maintaining his innocence for years, Hinds discovered a miscellaneous case file maintained by the Detroit Police Department through a FOIA request. This case file contained exculpatory evidence that was wrongfully withheld from his state-appointed defense attorney during his trial in 2001. Within this miscellaneous case file, there was an overwhelming amount of evidence supporting his claims of actual innocence including witness statements, DNA evidence, and usable fingerprints. In April 2020, Hinds filed an exoneration application with the CIU.

“Prosecutors are often thought to be the enemy when it comes to proving innocence, but the truth is that there are some prosecutors who are more concerned with justice than just getting a conviction. The community needs to hear both sides and remember the power of voting for the right people because prosecutors are elected officials,” says juvenile lifer Robert Hinds.

Supporters can sign the petition for Hinds’ freedom at www.change.org/freeroberthinds. More information about Hinds’ exoneration journey and community service work over the last decade can be found at www.growingboys2men.blogspot.com. Hinds can also be contacted directly at www.jpay.com using the inmate ID 410196.

The event will be streamed via Facebook Live on A Life for a Life Urban Initiative’s Facebook page at www.facebook.com/alife4alifeUI.