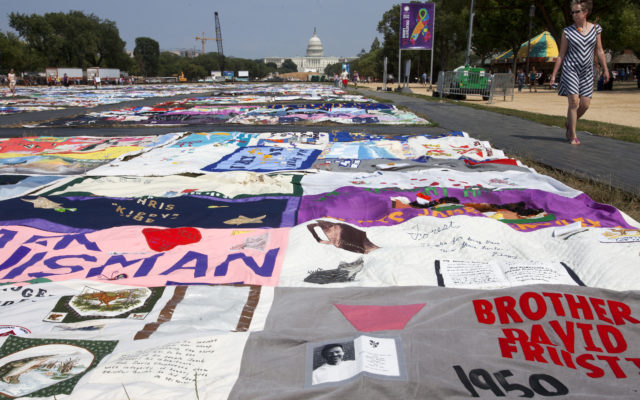 People visit the AIDS Memorial Quilt on display as part of the Smithsonian Folklife Festival on the National Mall in Washington, on Thursday, July 5, 2012. An AIDS-free generation: It seems an audacious goal, considering how the HIV epidemic still is raging around the world. Yet more than 20,000 international HIV researchers and activists will gather in the nation's capital later this month with a sense of optimism not seen in many years _ hope that it finally may be possible to stem the spread of the AIDS virus. (AP Photo/Jacquelyn Martin)

During Black History Month, the National AIDS Memorial honors Black lives lost to AIDS with a specially curated selection of 56 blocks of the AIDS Memorial Quilt (the Quilt). The exhibition uses the beauty and power of the Quilt to bring to light stories of the countless men, women and children who have died, and the impact AIDS has had on Black Americans.

“This virtual exhibition shares stories of hope, healing and remembrance to honor Black lives lost to AIDS,” said John Cunningham, Executive Director of the National AIDS Memorial. “Our hope is that it helps raise greater awareness about the ongoing struggle with HIV and the impact systemic barriers have to positive health outcomes, particularly among the Black community.”

In the 40 years since the first cases of AIDS were reported, Black Americans and communities of color have been disproportionately impacted by AIDS. By 1993, HIV was the leading cause of death for Black men between the ages 25-44 and by 2004, HIV became the leading cause of death for Black women in the same age group. In 2018, Black Americans made up 42% of the nearly 38,000 new HIV diagnoses in the U.S., with half of those living in southern states. The Quilt is a powerful tool to reach these communities through its stories of resilience, healing, hope and remembrance represented in each panel.

“Today, Black Americans face the highest impact of HIV/AIDS compared to all other races and ethnicities. This highlights the need to center Black and LGBTQ people in the fight to end the epidemic,” said Raniyah Copeland, President and CEO, Black AIDS Institute. “By sharing these powerful stories from the Quilt, we can continue to advocate for Black people living with HIV, defy stigma, and create awareness around prevention and treatment options available today that can end HIV in Black communities over the next decade.”

In 2013, as part of ongoing awareness and educational efforts, a special Quilt program, Call My Name, was created to draw attention to HIV/AIDS in the Black community and the public health crisis that still exists today. The program aims to create a greater number of Quilt panels that reflect the impact of HIV/AIDS within the Black community and the effect stigma and prejudice have on increased infection rates.

“We selected Quilt panels for this exhibition that tell some of the many stories of Black Americans who lost their lives to AIDS, and whose loved ones honored them by stitching their stories, their memories, their hopes into the Quilt,” said Gert McMullin, National AIDS Memorial Quilt Conservator. “These stories are of children, women and men who we lost to AIDS and who all are remembered through the Quilt.”

Some of the featured stories in the exhibition include:

· Panels made as part of the Call My Name program, one of which honors Wandra, made by her hairdresser, who kept Wandra’s secret of being HIV-positive for 10 years, until her death. She wanted to honor Wandra, a neonatologist in Atlanta, who “had a life of accomplishment” noting that her friend loved to ski and watch ballet, “I wanted to honor that.” (Block 5788)

· Black children who lost their lives to AIDS, including one panel that honors two year old Alexzandria that shows her photo, a teddy bear, Big Bird and a poem written by her mother Charlene, who says she pours her grief into the poems and stories she has been writing since Alexzandria died. “I can be angry about it, but instead I soothe myself with my writing.” (Block 2542) Another memorializes “Dougie,” who lost his life to AIDS at the age of eight. His mother lovingly made his panel, which includes a painting of him from a photo taken when he met musical artist Ice-T. (Block 2268)

· Panels in memory of Black women who died of AIDS, such as Belynda, a Massachusetts AIDS activist who dedicated herself to helping organize Black churches in the fight against AIDS. According to her pastor, “within a few years, she had 45 black churches doing prevention education…she helped us cross ideological and theological lines.” (Block 5718)

· Black celebrities – musicians, artists, designers, journalists – lost to AIDS, and, through their work and connection to people, brought awareness to the pandemic. A Quilt panel honors Sean Sasser, an AIDS activist who appeared on MTV’s The Real World: San Francisco, and who openly shared his relationship with Pedro Zamora, helping open hearts and minds to LGBT issues and those living with HIV/AIDS. (Block 5975) Another remembers the iconic “Sylvester” James, Eazy-E, Max Robinson, Arthur Ashe and Willi Smith, with records, CDs and photographs sewn onto it. (Block 5888)

· Several panels honor Black men who died of AIDS, including three that have military uniforms sewn into them to honor their service. (Block 5976) Another honors George Gramby, who spent the last decade of his life helping people overcome substance abuse, forming a program called “Beginnings”, which still operates today. For more than 25 years, the town of Morristown, New Jersey holds an annual day in his memory. (Block 5592)

The Black History Month exhibition coincides with National Black HIV/AIDS Awareness Day #NBHAAD on February 7, 2021. The exhibition is free to the public and can be viewed at www.aidsmemorial.org through March 31, 2021. Visitors to the site can also view all 48,000 panels of the Quilt and search for the names of loved ones who have a panel made in their memory.

1 dead at Florida pride parade after truck drives through crowd