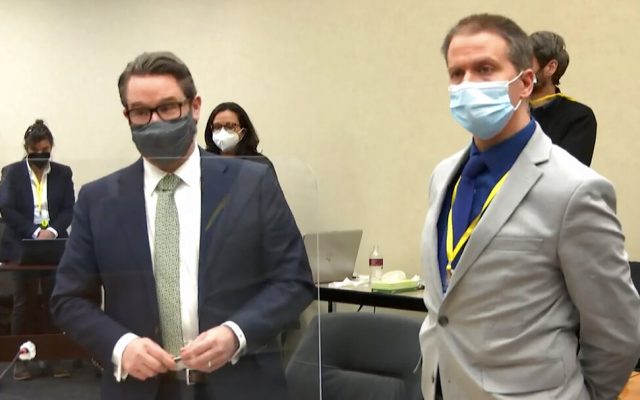 FILE - In this April 19, 2021, file image from video, defense attorney Eric Nelson, left, accompanied by defendant, former Minneapolis police Officer Derek Chauvin, speaks to the judge at the Hennepin County courthouse in Minneapolis, Minn. Prosecutors fought hard to add a third-degree murder charge against Chauvin, but a conviction on that charge alone could set up a problematic scenario for them. (Court TV via AP, Pool)

MINNEAPOLIS (AP) — Former Minneapolis police Officer Derek Chauvin has been convicted of murder and manslaughter in the death of George Floyd, the explosive case that triggered worldwide protests, violence and a furious reexamination of racism and policing in the U.S. The jury deliberated about 10 hours over two days in a city on edge against another outbreak of unrest. Floyd died last May after Chauvin, a white officer, pinned his knee on or close to the 46-year-old Black man’s neck for about 9 1/2 minutes. The verdict set off jubilation around the city. People instantly flooded the surrounding streets downtown, running through traffic with banners. Cars blared their horns. Floyd family members who had gathered at a Minneapolis conference room could be heard cheering.