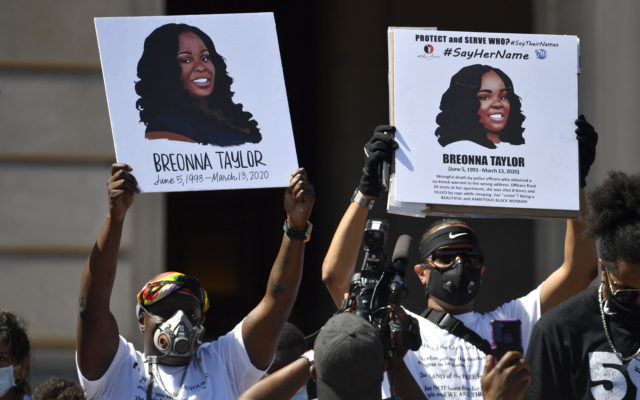 FILE - Signs are held up showing Breonna Taylor during a rally in her honor on the steps of the Kentucky State Capitol in Frankfort, Ky., Thursday, June 25, 2020. The city of Louisville will pay several million dollars to the mother of Breonna Taylor and install police reforms as part of a settlement of a lawsuit from Taylor’s family, The Associated Press has learned. (AP Photo/Timothy D. Easley, File)

A Kentucky grand jury has brought no charges against Louisville police for the killing of Breonna Taylor during a drug raid gone wrong. Prosecutors said Wednesday that two officers who fired their weapons at the Black woman were justified in using force to protect themselves. Instead, Officer Brett Hankison was charged with three counts of wanton endangerment for firing into the apartments of Taylor’s neighbors. Taylor was shot multiple times by officers who burst into her home on March 13 during a narcotics investigation. Protesters began marching in Louisville immediately after the charges were announced. Many people were expressing anger and frustration that the grand jury did not do more.